The pound /dollar currency pair gradually approached the main range level, where it slowed down for a while. Whether the quotation will be able to overcome the level or whether the looped horizontal movement will continue – this is a difficult question which we will discuss in our article.

From the point of view of technical analysis [TA], we see that from the beginning of the trading week, the currency pair very smoothly built a downward move, conditionally practicing the psychological level of 1.3000. As a result, we got a decline to the subsequent control value in the face of the range level of 1.2770 [1.2750 / ( 1.2770) / 1,2800]. The most interesting point in this scenario is that the volatility for all this time was extremely low for such an active pair like GBP/USD. Spreading the volatility into numbers, we see that the activity of the quote was below the average daily indicator of 111 points for ten days in a row [58 -> 65 -> 97 -> 62 -> 75 -> 45 -> 67 -> 58 -> 53 -> 83 points], and even at the moment of control rapprochement with a key range level, the acceleration of volatility was extremely weak, 83 points. Having an analysis of volatility, we can safely say that the indecision of market participants is at a high level, which may to some extent affect the possibility of a breakdown of the key level of 1.2770. Summing up the primary result, we can say that overbought amid rapid growth on October 10-21 led tothe fact that the market ambiguously hovered between two strong levels of 1.2770/1.3000, where activity / excitement subsided, and most market participants took a wait-and-see position until the breakdown.

Analyzing the past hour, we see that the main price jump occurred in the period from 11: 00-12:00 [UTC+00 time at the trading terminal], giving out 60 points of the move. We will analyze the cause of the surge a little later.

As discussed in the previous review, traders who took short positions even from 1.2925 values entered the fixation stage due to the risk of price rebound from the level.

Considering the trading chart in general terms [the daily period], we see that the movement in the range of 1.2770 / 1.3000 is still preserved in the market, where on the left we see an intense inertial move, and in the global view, a downward trend is maintained.

The news background of the past day contains data on applications for unemployment benefits in the United States, where there was a decrease in applications by 10 thousand.

Market reaction to statistics was indirect, where it played a secondary role.

On Thursday, the key event was a meeting of the Bank of England, where the interest rate was of course left at the same level, 0.75%, but the surprise for speculators was a vote by members of the Central Bank’s board. Thus, for the first time since 2016, two members of the bank’s committee voted in favor of easing monetary policy, expressing a desire to reduce the interest rate by a quarter point. The heroes of the imagining day are Michael Saunders and Jonathan Haskel [a member of the Bank of England Committee]. Against this background, the pound sterling reacted almost fleetingly with a decline, just in the time interval of 11: 00-12:00 UTC+00, as written above.

The press conference that followed after the meeting carried a standard package of information. Now, the head of the Bank of England Mark Carney outlined the risks associated with the latest economic forecasts of the Bank of England, and they are distorted in a negative direction. That is, Carney gives a signal in some way that the next change in monetary policy will be a reduction in interest rates. At the same time, the regulator noted that the risk of uncontrolled Brexit decreased, and this could have a beneficial effect on enterprises.

In terms of the Brexit divorce proceedings and the parliamentary elections, we have the creation of a coalition between the three British parties [liberal-democratic,Welsh “Plaid Cymru” and the “green” party], which united against Brexit.

“We are pleased that an agreement has been reached. This is an important moment for all people who want to support candidates supporting the preservation of EU membership throughout the country, “said a statement by liberal Democrat leader Joseph Simonson.

Today, in terms of the economic calendar, we have quietness and smoothness; no news worthy of attention is expected. The upcoming trading week in terms of the economic calendar is full of statistics. Almost every trading day stands out with something, thus, it should not be boring. In addition to everything, we have, as always, a dense informational background, which will surely be able to please us with the election race.

The most interesting events displayed below —>

Analyzing the current trading chart, we see a kind of slowdown after the quotation touched the limits of the range level of 1.2770 [1.2750 / ( 1.2770 ) / 1.2800]. In fact, the characteristic ambiguity, and most importantly indecision, strongly puts pressure on market participants, which makes it impossible to confidently pass the key level of 1.2770 in favor of restoring the initial trend. Thus, the available pressure can easily confuse the interests of market participants, giving out the primary fluctuation along the range level, after which it has one of two variations.

By detailing the per-minute movement, we see extremely weak activity, conditionally having 30 points of amplitude when calculating at maximum. There are currently no pulsed candles or a sharp surge, the only thing we have is the influx of participants in connection with the opening of the European trading session.

In turn, traders switched to active profit taking, after which a wait-and-see trading position is made using the Rebound / Breakout method.

It is possible to assume two possible variations that can be taken into work: The first [rebound], in case of a short fluctuation along the range level, the quotation will again feel support, then at the moment the price is higher than 1.2830-1.2850, you can take a bullish position, continuing to work within the range of 1.2770 / 1.3000; The second option [breakdown], if the range level of 1.2770 still falls, then fixing the price lower than 1.2750 will open us the stage of restoring the original interest. 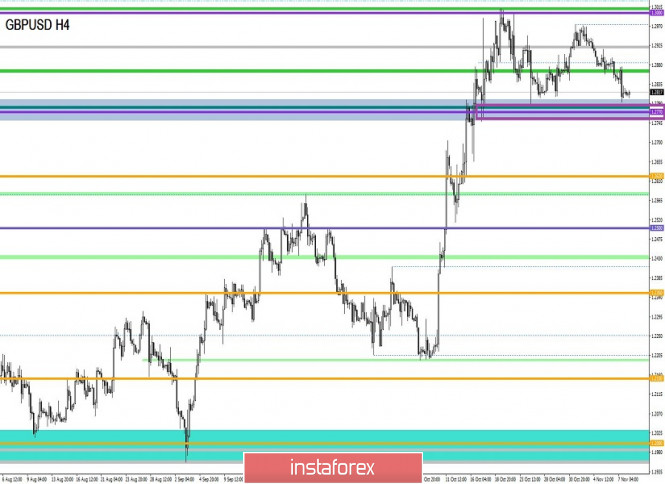 – Sales positions will be considered in case of price exit lower than 1.2750.

Analyzing a different sector of timeframes (TF), we see that indicators in their main features signal a further decrease in quotes. Short-term periods are currently working at a variable stage in connection with the existing stagnation. 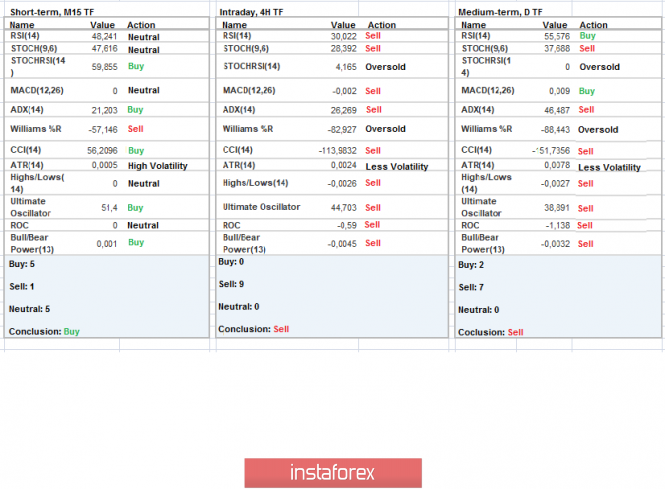 The current time volatility is 18 points, which is an extremely low indicator for this time section. It is likely to assume that a low indicator, in this case, is associated with high indecision about a key level. Thus, acceleration of volatility can occur in the event of a breakdown of a range level or a rebound from it. *** The article is built on the principle of conducting a transaction, with daily adjustment

← Technical analysis recommendations for the EUR/USD and GBP/USD on November 8
USDJPY – take profit! →