The markets regarded the news on the course of trade negotiations between the US and China as positive, as a result of which stock indices continued to grow, and there was a large-scale sale in fixed-income markets.

The main driver of growth is that the refusal to raise tariffs could mitigate the negative impact on the US economy and allow the Fed to take a break in the rate reduction cycle. These expectations led to an increase in demand for the dollar, as fears of a recession faded into the background against the backdrop of an increase in the yield spread.

However, it is unclear how long the period of euphoria will last. It must be assumed that it is unlikely to be prolonged. Macroeconomic indicators in the US and the eurozone remain weak, global trade is slowing, and consumer demand is declining. Together, these three factors will not allow to count on growth, and therefore, as soon as the factor of negotiations recedes into the background, sales can resume against the backdrop of the growing threat of a global recession.

The euro failed to hold near Thursday’s lows after the Bank of England concluded its monetary policy meeting, and a wave of optimism overwhelmed the markets related to intermediate assessments of the course of trade negotiations. The negativity is reinforced by another failed report on industrial production in Germany. In September, the decline was 0.6%. which turned out to be worse than expected, the annual decline increased to -4.3%. At the same time, there has been an increase in production orders, which may indicate that the decline in production has reached a minimum level and the recovery phase is beginning. 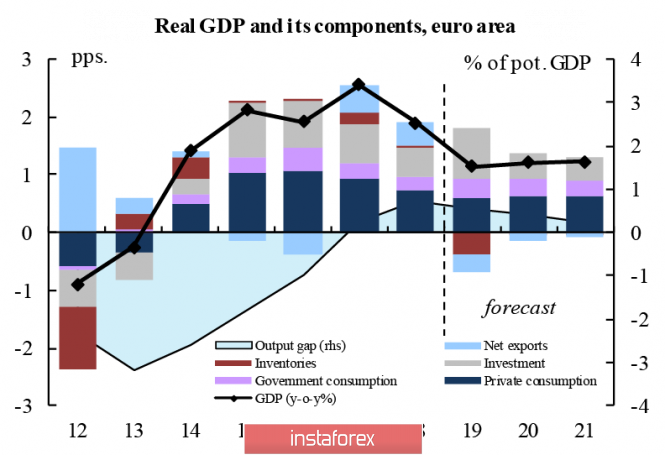 The short-term expectations for the EUR/USD are neutral. The nearest resistance has formed at the level of 1.1090. As long as the euphoria reigns in the markets, associated with positive expectations for trade negotiations, the euro will not be able to resume growth, as the dollar will remain the undisputed favorite.

The Bank of England, at the meeting that ended on Thursday, left all the monetary policy instruments used unchanged. The rate is still at 0.75% and the volume of government bonds on the BoE’s balance sheet remained at the level of 435 billion pounds. However, for the first time this year, unanimity was violated, as two members of the Cabinet spoke in favor of an immediate reduction in the rate.

Moreover, economic growth forecast for 2020 adjusted by + 0.2%, primarily due to the fact that the uncertainty factor associated with Brexit starts to disappear, and therefore, investment growth is forecasted, although the forecast is reduced by 0.6% for the next two years.

The forecast on inflation has been reduced for all three subsequent years, while BoE notes that inflation expectations, which noticeably reduced over a long forecast horizons, have also fallen in the United States and the eurozone, and therefore, inflation can be considered a global trend. 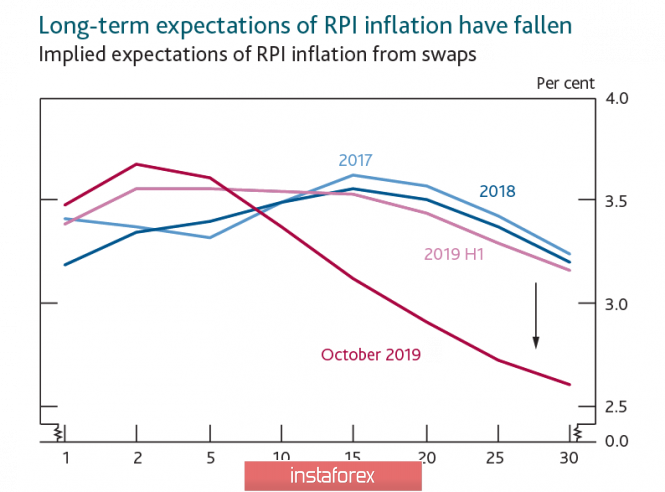 As for the internal factors affecting prices, the Brexit saga continues to dominate in the first place. Both businesses and households expected Brexit to increase import prices due to the loss of trade preferences, and this factor reduces its influence at the current stage, which means that inflationary expectations are also going down. Such dynamics give the Bank of England reason to switch to a dovish rhetoric.

In addition, negative factors include the growth of negative trends in the labor market. The demand for labor began to slow down, so the probability of a slowdown in wage growth is also growing.

On December 12, general elections are scheduled in the UK. Their outcome will determine the scenario for Brexit. On Friday morning, the pound looks weak, as the bearish pressure intensifies. In the coming hours, a successful test of support 1.2785 is likely, after which the movement will strengthen. The target of 1.2582 can be reached by the middle of next week.