On the short-term chart of the euro, the latest wave construction is bearish, from March 20. It has a pronounced flat character, taking the place of correction in a larger wave model. The analysis of the structure shows the formation of the final part (C). It has a distinct zigzag.

In the downward section that began yesterday, there was a counter wave of the smallest scale. At the next sessions, a flat stop or a short-term price increase is expected. Towards the end of the day, the probability of a return to the bearish rate of movement increases. A breakthrough below the support zone is not expected today.

Open transactions for the sale of the euro in the near future need to either close the counter order or close. Purchases are highly risky, possible only with short-term “scalping”. Until the completion of the current wave, the main priority should be given to sales of the pair. 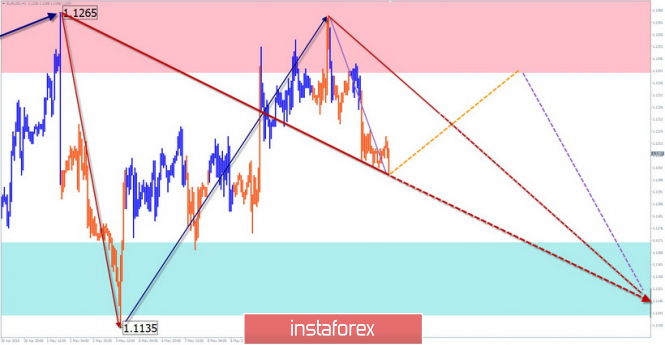 The bearish section of May 3 completes a larger downward wave formation. The price has reached the next level of support, passing in a wide potential reversal zone of the senior TF.

On the chart of the smallest TF, an upward reversal structure has formed, which indicates the flat character of the upcoming sessions. Possible short-term price growth. A return to the main movement vector is likely at the end of the day or tomorrow.

The most reasonable behavior of traders in the pair market today will be abstaining from transactions for the rollback period. Supporters of intra-session trading can make short-term purchases with a reduced lot. A general recommendation would be to look for sell signals at the end of the upcoming price rise. 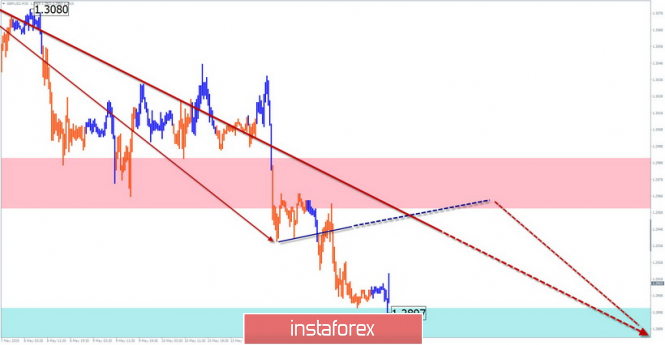 Explanations to the figures: Waves in the simplified wave analysis consist of 3 parts (A – B – C). The last unfinished wave is analyzed. Zones show areas with the highest probability of reversal. The arrows indicate the wave marking according to the method used by the author, the solid background is the formed structure, the dotted ones are the expected movements.

Note: The wave algorithm does not take into account the duration of tool movements over time.

← The reasons are different but the result remains the same: the euro and the pound are aimed at further reducing.
Trading recommendations for the EURUSD currency pair – placement of trading orders (May 15) →