The direction of the short-term trend of the European currency in the main major since the end of July is set by a flat downward correction wave. Now it looks like a shifting plane, however, it may continue. There are no signals of a course change on the chart yet.

The scenario described in the previous review is expected to continue today. A general downward movement vector is likely. Short-term pressure on the resistance zone is possible in the next session. The scope of the daily downward movement will limit the calculated support.

Until the end of the entire current downward wave, euro purchases are premature. Within the intraday, you can sell a pair with a reduced lot. 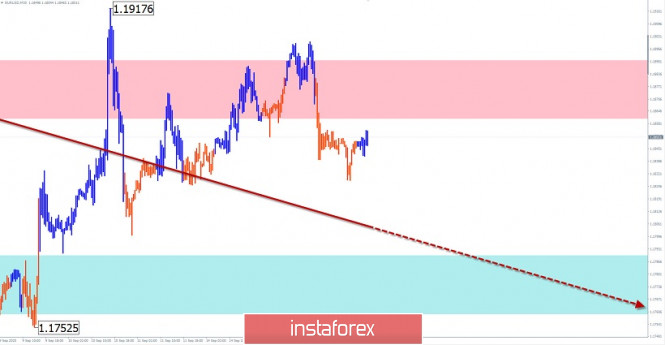 The last section of the dominant upward trend of the Australian dollar started on August 20. Its structure shows a complete zigzag of the first parts of the wave (A-B). The upward segment from September 9 has a reversal potential and may be the beginning of the final part (C). A pullback has been forming on the chart since last week.

Today, the pair’s movement is expected to be mostly flat, in the price corridor between the opposite zones. In the first half of the day, you can count on a downward vector. By the end of the day, a reversal and the beginning of price growth is likely.

Today, trading on the pair’s market is only possible within a day. Sales are riskier, so it is better to make the lot minimal. After the rollback is completed, purchases will be prioritized. 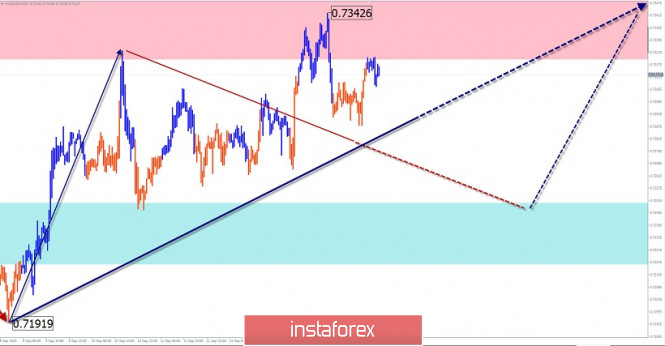 Explanation: In the simplified wave analysis (UVA), waves consist of 3 parts (A-B-C). The last incomplete wave is analyzed. The solid background of the arrows shows the formed structure, and the dotted one shows the expected movements.

Note: The wave algorithm does not take into account the duration of the instrument’s movements in time!