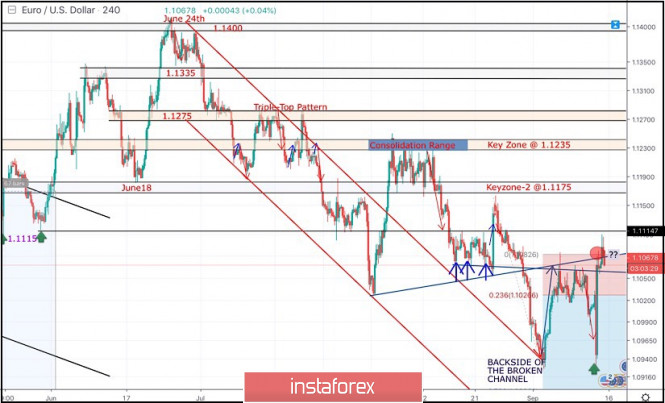 Bearish breakout below 1.1175 promoted further bearish decline towards 1.1075 where the backside of the broken bearish channel has provided temporary bullish demand for sometime (Bullish Triple-Bottom pattern).

However, the depicted Triple-Bottom pattern was invalidated especially after the EURUSD pair bulls have failed to establish Bullish persistence above 1.1115.

Moreover, the recently established short-term uptrend line has been invalidated as well thus rendering the short-term outlook as bearish.

Two weeks ago, a quick bearish decline was demonstrated towards 1.0965 – 1.0950 where the backside of the broken channel came to meet the EURUSD pair again.

Risky traders were advised to look for a valid BUY entry anywhere around the price levels of 1.0950. All T/p levels were successfully reached within the recent bullish movement during last week’s consolidations.

Earlier this week, the EUR/USD pair was testing the backside of both broken trends around 1.1060-1.1080 where significant bearish pressure pushed the pair directly towards 1.0940 (Prominent Weekly Bottom).

Bearish Breakdown below the price level of 1.0940 was needed to enhance further bearish decline towards 1.0900 and 1.0840 (Fibonacci Expansion Key-Levels).

However, SIGNIFICANT bullish rejection is being demonstrated as a quick bullish spike towards 1.1100 where cautious watching of price action should be done.

Bullish persistence above 1.1080 gives an early signal of short-term bullish reversal possibility as a bullish double-bottom pattern with a projected target towards 1.1175.

On the other hand, re-closure below 1.1050 renders the recent bullish spike as a bullish trap, preparing for another bearish decline towards 1.0940.