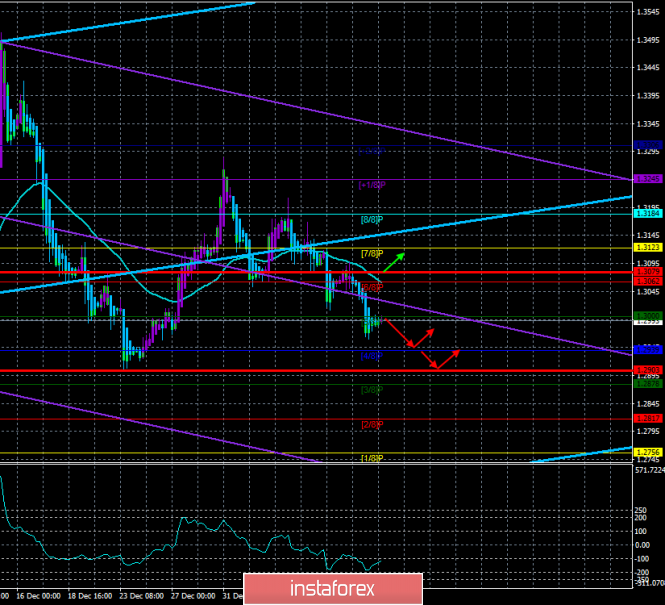 The upper channel of linear regression: direction – up.

The lower channel of linear regression: direction – down.

The British pound was preparing for an upward correction at the end of last week and the beginning of the current one, but “excellent” macroeconomic statistics from Albion yesterday returned the pound-dollar pair in a downward direction. Traders managed to overcome the Murray level of “5/8” – 1.3000, after which the downward movement stalled, but the upward correction did not begin. We believe that traders are preparing for new sales of the British currency today, as they do not want to reduce short positions. Thus, today much will depend on the same report on inflation in the States. If it does not fail, then there will be even more reasons for new purchases of the dollar. If it is neutral, it is likely to continue the moderate movement of the pair down. If it is weak, an upward correction is possible. All these arguments relate to the American trading session.

It does not matter whether each citizen has antipathy or sympathy for the British Prime Minister Boris Johnson. It should be recognized that after a series of defeats in office, he still managed to resume the procedure of “divorce” with the European Union. Thus, he won the victory, but now he and his country are entering a much more complex “war”. The whole problem of Brexit was that the majority of parliamentarians refused to accept an agreement that was considered unprofitable for Britain. Johnson solved the problem elegantly, but ineffectively. Elegant – because instead of bringing the deal to a point where it would have suited the parliament, he simply changed the composition of the parliament, taking advantage of the fact that most Britons are just tired of Brexit and they voted for the conservatives just to get out of the EU as quickly as possible and complete this epic. Ineffective – because the very essence of the deal has remained the same, it has not become more profitable for the UK, and, according to Jeremy Corbyn, has become “even worse than Theresa May’s agreement.” Moreover, now Boris Johnson can leave the UK without a deal with the European Union at all, as he has a mania for the fastest possible withdrawal of the country from the Alliance and does not want negotiations on a trade agreement to last more than 11 months. Johnson does not care about the fact that similar negotiations between other countries lasted for 7-10 years. He, in the style of Donald Trump, wants to negotiate as quickly as possible and get the deal that will suit him first. In one of his last statements, Johnson said that he wants zero tariffs, which will help avoid checks at the border between Britain and Northern Ireland. “I am confident that we will do this – we will conclude an agreement with our friends and partners in the EU on zero tariffs and zero quotas,” said the British Prime Minister. However, if in the case of Brexit itself, the EU may have made some concessions, perhaps fully realizing that it is better to let Britain go than to live forever in limbo. Then, in the case of trade negotiations, things may be much more complicated. Irish Foreign Minister Simon Coveney, for example, said that negotiations with London can last much longer than 11 months, and “if the British Parliament has made a decision, it does not mean that it is binding on the 27 member states of the EU.” Earlier, other representatives of the European Parliament stated that the country can only receive all trade preferences if it is a member of the EU.

Thus, potentially the pound receives a new factor of decline since the future of Great Britain and its economic component will depend on trade negotiations. From a technical point of view, most of the indicators (all except the upper linear regression channel) are directed downwards, and the fastest Heiken Ashi indicator does not even signal a correction at the moment. 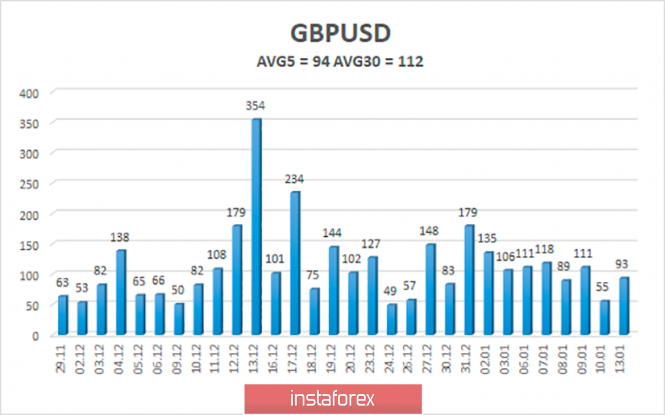 The average volatility of the pound-dollar pair over the past 5 days is 94 points, still slightly lower, but remaining at a fairly high level. According to the current level of volatility, the working channel on January 14 is limited to the levels of 1.2903 and 1,3079, and we expect to work out the lower limit of the volatility channel by the end of today. The beginning of the correction, as before, is signaled by the Heiken Ashi indicator with a turn upwards.

The GBP/USD pair continues to move down. Thus, traders are advised to remain in the sales of the British pound with the targets of 1.2939 and 1.2903, as there are no signs of the beginning of correction now. It is recommended to buy the British currency not earlier than the return of the pair above the moving average, but even in this case, it should be remembered that the fundamental background is not on the side of the pound.

In addition to the technical picture, you should also take into account the fundamental data and the time of their release.

Explanation of the illustrations:

The upper channel of linear regression – the blue lines of the unidirectional movement.

The lower channel of linear regression – the purple lines of the unidirectional movement.

CCI – the blue line in the indicator regression window.

The moving average (20; smoothed) – the blue line on the price chart.

Heiken Ashi – an indicator that colors bars in blue or purple.

Possible variants of the price movement:

← Overview of EUR/USD on January 14. The inflation report may return demand for the dollar
USD/CAD bounce in progress above support! →