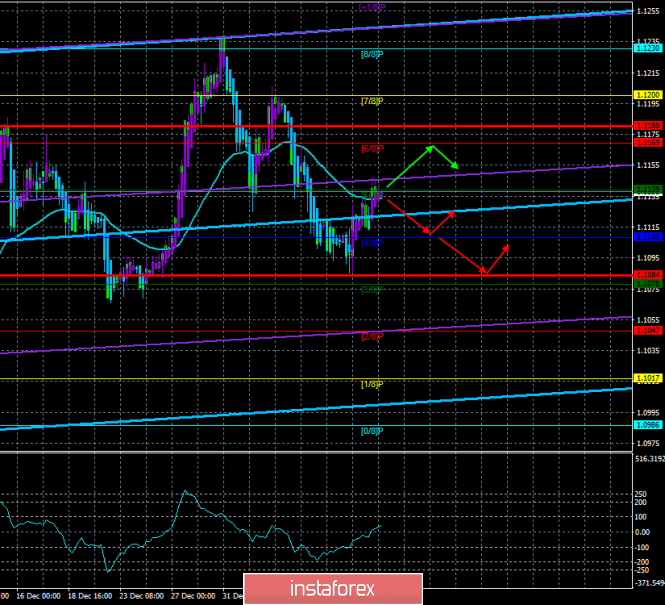 The upper channel of linear regression: direction – up.

The lower channel of linear regression: direction – up.

For the EUR/USD currency pair, the day ended with a continuation of the upward correction, within which it was possible to overcome the moving average line. However, it should be noted at once that the overcoming of the moving is uncertain, and above the Murray level of “5/8” – 1.1139, the bulls have not yet managed to gain a foothold at all. Thus, we still tend to believe that the downward trend should be resumed, since most technical and fundamental factors are in favor of this. However, as before, we recommend that traders follow the trend and not try to get ahead of it. That is, if the consolidation above the moving does happen, then short positions will not be relevant and you will need to consider trading for an increase.

On the second trading day of the week, January 14, the only important macroeconomic report will be published – inflation in the United States. Thus, today, everything will revolve around inflation and depend on it. According to experts, in annual terms, the consumer price index may grow to 2.3% from the previous of 2.1%. Well, this increase can be called an “acceleration”, and if the forecasts come true, it will be a positive factor for the US currency and its buyers. It should also be noted that the recent macroeconomic publications in the States were quite strong, which still indicates a good growth rate of the American economy. Against the background of other strong statistical indicators, the acceleration of inflation will not be surprising. However, high forecasts do not indicate a 100% probability of accelerating inflation, so any value below 2.3% y/y will be regarded as weak. However, comparing the consumer price indices in the European Union and America, the huge gap is again visible to the naked eye. Inflation in the EU is currently at 1.3% y/y.

Meanwhile, against the background of the impending signing of the “first phase” agreement between China and the United States, the US Treasury decided to make a gesture of “goodwill” to Beijing and exclude China from the list of currency manipulators. This conclusion was made in the report of the Ministry of Macroeconomics and Monetary Policy. “China has agreed to limit the impact on the yuan’s exchange rate,” it says. Now the United States is waiting for a complete end to the maintenance of the low yuan and the opening of its financial market to foreign investors.

Meanwhile, according to Steven Mnuchin, the United States has a problem that could cost the country – about 0.5% of GDP. We are talking about the Boeing concern, which is one of the largest exporters in the country. About a year ago, due to two plane crashes of Boeing-737 MAX, the company decided to suspend the production of these models of aircraft, as well as the use of already produced aircraft. It is not known when these models will be returned to service. “There is no doubt that the situation with Boeing will slow down economic growth. Boeing is one of the largest American exporters, and problems with the 737 MAX aircraft may take away 0.5% of the GDP growth rate this year,” said the US Treasury Secretary. “Without these problems, growth in 2020 would have been 3.0%,” Mnuchin concluded.

Thus, potentially in 2020, the growth rate of US GDP may begin to slow down, although if you look at current GDP indicators, you still need to get to the projected 2.5% y/y. However, in any case, if the problems with Boeing are not resolved, this will affect the GDP. However, this is not an immediate prospect. In the short term, the “crown” remains on the dollar’s head, so we expect the downward trend to continue. The euro-dollar pair continues to adjust. Thus, at the moment, traders are advised to wait until the correction is completed, the Heiken Ashi indicator turns down or the resumption of selling the euro with the targets of 1.1108 and 1.1084. It is recommended to return to pair purchases with a target of 1.1168 no earlier than overcoming the level of 1.1139 for traders with the first target of 1.1169.

In addition to the technical picture, you should also take into account the fundamental data and the time of their release.

Explanation of the illustrations:

The upper channel of linear regression – the blue lines of the unidirectional movement.

The lower channel of linear regression – the purple lines of the unidirectional movement.

CCI – the blue line in the indicator window.

The moving average (20; smoothed) – the blue line on the price chart.

Heiken Ashi – an indicator that colors bars in blue or purple.

Possible variants of the price movement:

← Simplified wave analysis of GBP/USD, USD/JPY, and USD/CHF on January 14
Overview of GBP/USD on January 14. The EU is not going to rush into negotiations on a trade deal with Boris Johnson →