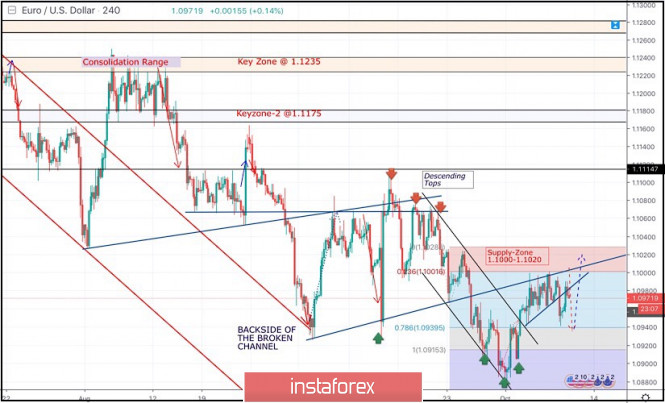 Recent Descending-Tops were established around the price levels of 1.1060-1.1075 where the backside of both broken trends was retested.

This rendered the recent bullish spike above 1.1100 as a bullish trap.

Since then, the EURUSD has been trending-down within the depicted short-term bearish channel until recent signs of bullish recovery were demonstrated around 1.0880 (Inverted Head & Shoulders Pattern).

Shortly After, a bullish breakout above 1.0960 confirmed the mentioned reversal Pattern which opened the way for further bullish advancement towards (1.1000 -1.1020) where another episode of bearish rejection should be expected.

The intermediate-term outlook turned into bullish as long as the EURUSD pair pursues its current movement below 1.1030.

However, initial Intraday bearish pullback should be expected towards 1.0940-10915 where another bullish swing will probably be initiated.

On the other hand, If bullish persistence above 1.1030 (0% Fibonacci Expansion) is established earlier, the long-term projection target would be projected towards 1.1115 (Low Probability Scenario).

Intraday traders were advised to consider the recent bullish breakout above 1.0960 as a valid BUY signal. Initial bullish target level was already reached around 1.1000.

Another Intraday BUY entry can be considered upon a bearish pullback towards 1.0915-1.0940 (Backside of the broken bearish channel).