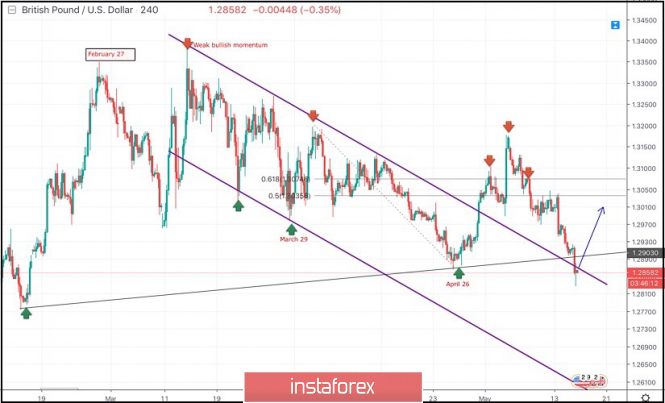 On March 29, the price levels of 1.2980 (the lower limit of the newly-established bearish movement channel) demonstrated significant bullish rejection.

This brought the GBPUSD pair again towards the price zone of (1.3160-1.3180) where the upper limit of the depicted bearish channel was located.

Since then, Short-term outlook has turned into bearish with intermediate-term bearish targets projected towards 1.2900 and 1.2850.

Shortly after, a bullish breakout above 1.3075 was temporarily being demonstrated until bearish breakdown below 1.3035 (50% Fibonacci level) was achieved last week.

Hence, a bearish Head and Shoulders pattern was being demonstrated on the H4 chart with neckline located around 1.2985.

As anticipated, The price zone of 1.3030-1.3060 turned to become a prominent supply-zone where a valid bearish entry was offered by the end of last week’s consolidations.

Initial bearish Targets were already reached around 1.2905-1.2850 (the backside of the broken channel) where another short-term bullish pullback is expected to be initiated towards 1.2985 before further bearish decline can occur.

← EUR and CAD: The eurozone economy has overcome a recession. The euro and the Canadian dollar continue to decline against
May 15, 2019 : EUR/USD Intraday technical analysis and trade recommendations. →