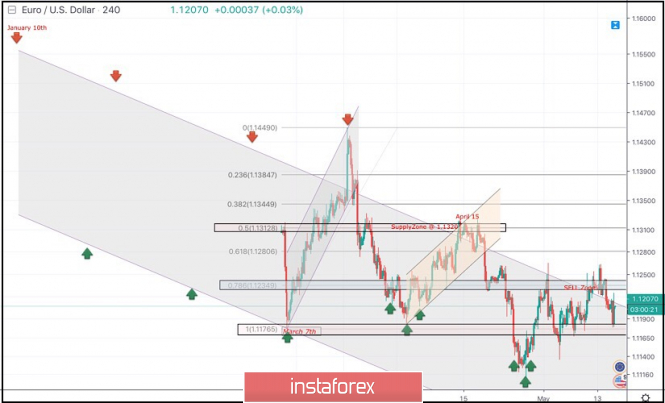 Few weeks ago, a bullish Head and Shoulders reversal pattern was demonstrated around 1.1200.

This enhanced further bullish advancement towards 1.1300-1.1315 (supply zone) where significant bearish rejection was demonstrated on April 15.

For Intraday traders, the price zone around 1.1235 (78.6% Fibonacci) stood as a temporary demand area which paused the ongoing bearish momentum for a while before bearish breakdown could be executed on April 23.

That’s why, the price zone around 1.1235-1.1250 has turned into supply-zone to be watched for bearish rejection.

On the other hand, the market has failed to sustain bearish pressure below the price Level of 1.1175 during last week’s consolidations.

That’s why, another bullish pullback was expected to occur towards the price zone of 1.1230-1.1250 where significant bearish pressure managed to push the EURUSD towards 1.1175 once more.

On the other hand, a bullish engulfing H4 candlestick has originated around 1.1180 earlier today.

That’s why, the pair remains trapped between the depicted key-levels (1.1175-1.1235) until breakout occurs in either direction.

For the bearish side to regain dominance, early bearish breakout below 1.1175 is needed to pursue towards 1.1115.

Conservative traders who were advised to have a SELL entry around the depicted supply zone (1.1235-1.1250) should lower their S/L towards 1.1235 to offset the associated risk.