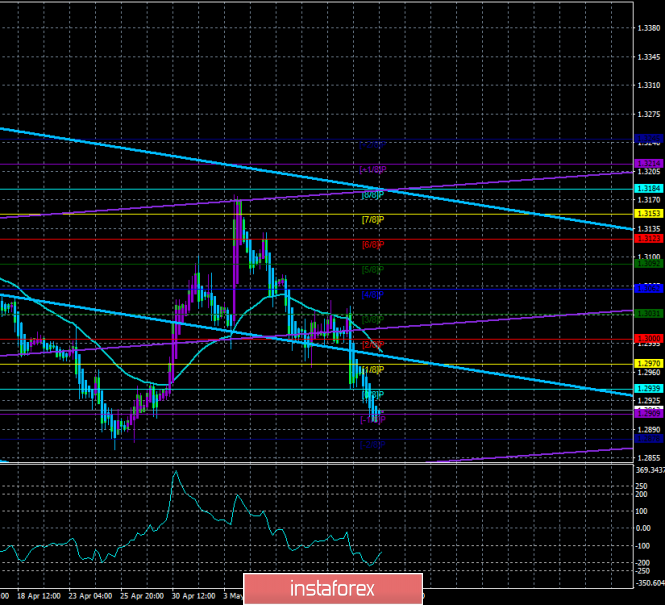 On Wednesday, May 15, the British pound continues to fall and has already come close to the lows of April. As we have said many times, the way of the pound is now only one – down. There is still no important, and positive news from the UK, so the pound has nowhere to draw inspiration. It would seem that a new date for voting on Brexit has been announced. Laborites and Conservatives, presumably, have come to some agreement, since Theresa May decided to hold the fourth vote. However, we recall that in the last year of such “positive” news was a lot that did not affect the process of adoption of the “deal” on Brexit. Then came the postponement of the date of exit of the country from the EU. Thus, in fact, there was nothing optimistic. Now, if the parliamentarians do accept the Theresa May initiative, it will be really good news. However, Brexit, in any case, will have a negative impact on the UK economy, but that’s another story. The most important thing for the Kingdom now is to complete the epic with Brexit. Until it came to the second referendum and the people’s refusal to withdraw from the EU.

The pair GBP/USD continues its downward movement. Thus, short positions with targets at 1.2909 and 1.2878 are now relevant, before Heiken Ashi’s indicator turns up, which will indicate a turn of an upward correction.

Buy-positions are recommended to be considered only after the pair is reversed above the moving average with the first targets at 1.3031 and 1.3062. In this case, the bulls will get a new chance to form an upward trend.

In addition to the technical picture should also take into account the fundamental data and the time of their release.

CCI – the blue line in the indicator regression window.

The moving average (20; smoothed) is the blue line on the price chart.

Heiken Ashi is an indicator that colors bars in blue or purple.

← EUR/USD. May 15. Trading system “Regression Channels”. The trade war with China returned the demand for the US dollar
EURUSD: Trump is preparing new duties on the US, and the euro is preparing for a further decline →