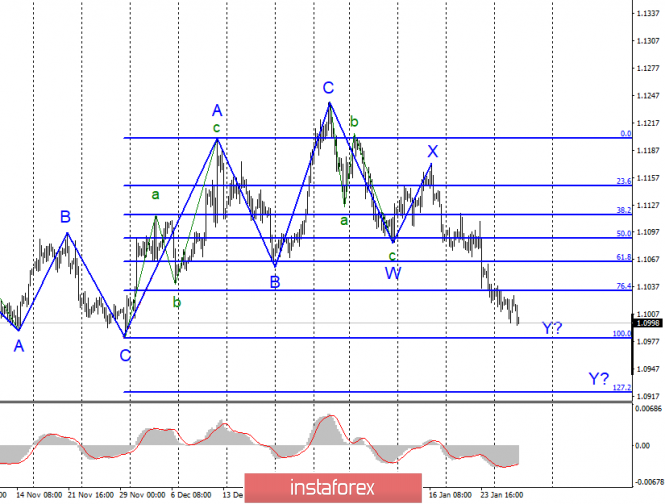 On January 28, the EUR/USD pair gained several base points and thus continues to build the expected wave y. Markets continue to get rid of the European currency. An unsuccessful attempt to break through the Fibonacci level of 76.4% may lead to quotes moving away from the reached lows and completing the construction of a downward wave and the entire downward trend section. A successful attempt will indicate the readiness of the Forex market to continue selling the euro currency and complicate the wave y.

The news background on Tuesday was interesting. Markets were waiting for the release of the report on orders for durable goods in America. And the results of this report surprised me enough. The total number of orders increased in December by 2.0% compared to November 2019. Markets expected to see a much more modest value. But other indicators were much worse than the expectations of the currency market. Orders for goods excluding defense decreased by 2.5%, excluding transport – decreased by 0.1%, and excluding defense orders and aviation – decreased by 0.9%. Thus, the data could be interpreted in different ways. This is exactly what the markets did, which at first continued to sell the euro, and then slightly weakened their selling positions, which led to the departure of quotes from the reached lows. In general, the decline of the European currency continues.

Today, all the market’s attention is focused on the evening meeting of the Fed, as well as on the speech of Jerome Powell. Economists, analysts, and currency market participants have little doubt that the US Central Bank will leave the key rate unchanged. Thus, the main attention will be focused on the accompanying statement of the Fed, as well as on the speech of the Fed Chairman Jerome Powell and his rhetoric. The latest not-so-good reports from America make us consider an option in which the rhetoric of the head of the Fed will become more “dovish”. Earlier, Powell said that during 2020, it is unlikely that the key rate will be revised downwards. However, if economic reports continue to deteriorate, the Fed may lower the rate again. In general, today, we just have to find out what has changed in the mood of the Fed.

The euro-dollar pair is presumably continuing to build a downward set of waves. Thus, I would recommend continuing to sell the instrument with targets located around the mark of 1.0982, which corresponds to 100.0% of Fibonacci. An unsuccessful attempt to break this mark will lead to a departure of quotes from the reached lows and, possibly, the completion of the wave y. Otherwise, I recommend staying in sales. 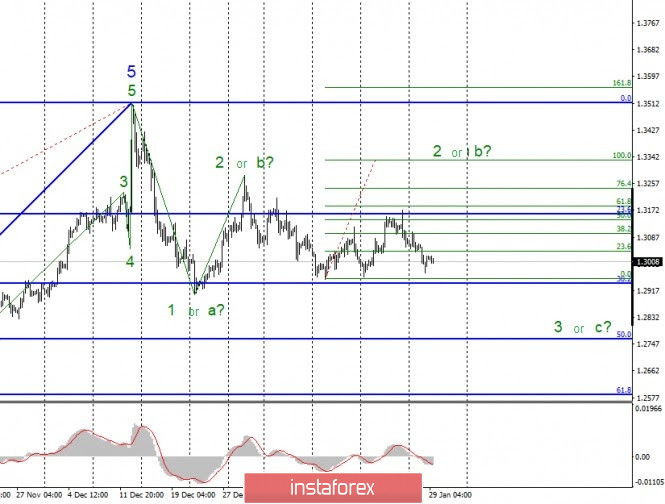 The GBP/USD pair lost about 40 basis points on January 28 and continues to decline within the expected wave 3 or C. The expected wave 3 or C, if it is currently being built, takes a very complex and extended form. The entire wave structure after December 23 may require adjustments and additions. Only a successful attempt to break through the Fibonacci level of 38.2% (the blue grid) can give confidence that the construction of the downward trend section will continue.

The news background for the GBP/USD instrument on Tuesday was the same as for the EUR/USD. And the market reaction was similar. There are no interesting news and economic reports from the UK at the moment, so only European and American news has to be examined. Today – it’s the same meeting of the Fed, but tomorrow will be a meeting of the Bank of England and the markets are hoping to get information about the plans of the British Central Bank in the coming months, as rumors about the willingness to lower the key rate have been going for a long time. It may be lowered tomorrow. In any case, the instrument needs to make a successful attempt to break the mark of 1.2941 to execute the main option. This requires strong comments today from Jerome Powell or weak comments tomorrow from Mark Carney (or a reduction in the key rate, or an increase in the number of votes cast for a rate cut).

The pound-dollar tool continues to build a new downward trend. I recommend selling the instrument with targets located around 1.2941 and 1.2764, which corresponds to 38.2% and 50.0% for Fibonacci. The tool can complicate the entire wave markup, so the increase can resume at 1.3329 (in the case of a successful attempt to break the 23.6% Fibonacci level) and then I recommend considering new sales of the tool around the mark of 1.3329.

END_OF_DOCUMENT_TOKEN_TO_BE_REPLACED

Technical analysis:EUR/USD has been trading downwards with strong momentum. The price tested the level of 1.0993. Due to strong bearish condition and short-term bear trend, my advice is to watch only for selling opportunities on the rallies.EUR is on t…

END_OF_DOCUMENT_TOKEN_TO_BE_REPLACED

To open long positions on GBPUSD, you need:
The technical situation in the GBP/USD pair has not changed in any way compared to the morning forecast, as traders do not have fresh guidelines regarding Brexit and the Bank of England’s decision on interest…

END_OF_DOCUMENT_TOKEN_TO_BE_REPLACED

To open long positions on EURUSD, you need:
From a technical point of view, the market has not changed much, however, the bulls again have to actively defend the support level of 1.1000, which was formed yesterday. The lack of volume at each false brea…

END_OF_DOCUMENT_TOKEN_TO_BE_REPLACED

Markets continue to be under pressure from the virus situation in China. Still, the markets have slowed down a bit. They are waiting for new data on the epidemic. So, the US market closed the day in positive territory.Now, the main event of the evening…

END_OF_DOCUMENT_TOKEN_TO_BE_REPLACED

Technical analysis:Gold has been trading to the downside. Price tested our downward target at the price of $1.568. I see further downside continuation and potential test of $1.563 and $1.557.My advice is to watch for selling opportunities on the rallie…