The euro has been growing slightly for the second day in a row after on Thursday the Fed announced a new record $ 2.3 trillion round of loans to support the labour market, as well as after dismal data on unemployment in the United States where the numb…

END_OF_DOCUMENT_TOKEN_TO_BE_REPLACED

Since December 30, the EURUSD pair has trended-down within the depicted bearish channel until the depicted two successive Bottoms were established around 1.0790 then 1.0650 where the EUR/USD pair looked OVERSOLD after such extensive bearish decline.Few…

END_OF_DOCUMENT_TOKEN_TO_BE_REPLACED

Recently, the GBPUSD has reached new LOW price levels around 1.1450, slightly below the historical low (1.1650) achieved in September 2016.That’s when the pair looked very OVERSOLD around the price levels of 1.1450 where a double-bottom reversal patter…

END_OF_DOCUMENT_TOKEN_TO_BE_REPLACED

The financial markets are again obeyed by the Fed, and any good news is overshadowed by a huge negative. Against this backdrop, the best weekly S&P 500 rally since 1974 should not surprise anyone. The stock index is rapidly reducing losses, ignoring the growth in the number of infected and died from coronavirus in the United States and in the world, the increase in the number of applications for unemployment benefits by 17 million in three weeks, the pessimistic forecasts of Wall Street Journal experts, who expect to see a 25% decline in US GDP in the second quarter, a rise in unemployment to 13% and a reduction in corporate profits by 36%. American stocks do not care, because if you do not have time to buy them now, you can be late.

History shows that stock indices usually recover faster than national economies, which is not surprising: GDP is a lagging indicator, and the S&P 500 is growing on expectations of a positive. According to the chief economic adviser to the US President Larry Kudlow, the US economy will need 4-8 weeks to return to normal operation at full capacity. Donald Trump would like to see its explosive growth. Together with moderate optimism from the New York city administration about the gradual release of coronavirus to the plateau, this creates a stir among buyers of equity securities. The growth of global risk appetite puts pressure on safe-haven assets, so we should not be surprised by the strengthening of EUR/USD. 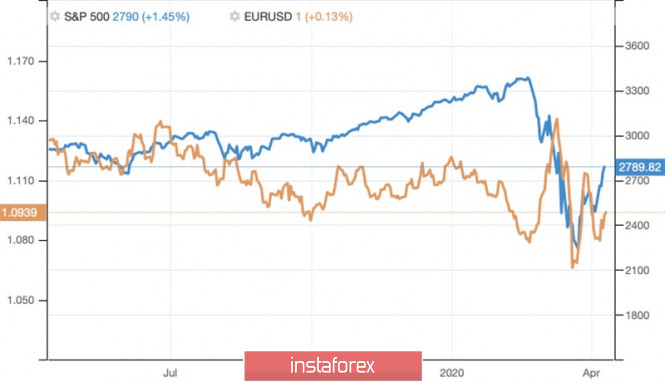 The euro was supported by the decision of Eurozone Finance Ministers to collectively help the countries of the currency bloc affected by the epidemic in the amount of €500 billion, as well as a split in the ranks of the ECB. According to the minutes of the March meetings of the Governing Council, a number of officials opposed the lifting of restrictions on bond purchases under QE. They suggest launching a new direct funding program for OMT for individual states.

The idea of selling the US dollar in the long run looks interesting. The growth of the Fed’s balance sheet to $9-12 trillion by the end of 2020 and the expansion of the US budget deficit to $3.6 trillion in the current fiscal year, which will end on September 30, are “bearish” factors for the USD index.

On the short-term time horizon, against the background of good news from the Old World and the rally of US stock indices, the overall picture for the main currency pair is moderately optimistic. However, at any moment, the scales can swing in the direction of the “bears”. It is enough to know that the G7 countries did not support the efforts of OPEC+ to reduce oil production. The growth of Brent and WTI on expectations of a 15 million b/d decline supported the shares of US oil companies and the S&P 500. If it stops, the stock index will go down and pull EUR/USD.

Technically, the pair plays a combination of “Expanding Wedge” and “Rhombus” patterns. A break in the diagonal resistance near 1.0965 will be a signal to open long positions in the target by 127.2% using the AB=CD pattern. It is located in close proximity to the mark of 1.121. On the contrary, a successful storm of support at 1.0765 will cause the euro to sell against the US dollar in the direction of 1.05.

END_OF_DOCUMENT_TOKEN_TO_BE_REPLACED

Gold price remains in a weekly bullish trend according to the Ichimoku cloud. Gold price tested the weekly Kumo (cloud) and bounced strongly off of it providing us with a move that has reached 2020 highs. There are a lot of chances of breaking to new h…

END_OF_DOCUMENT_TOKEN_TO_BE_REPLACED 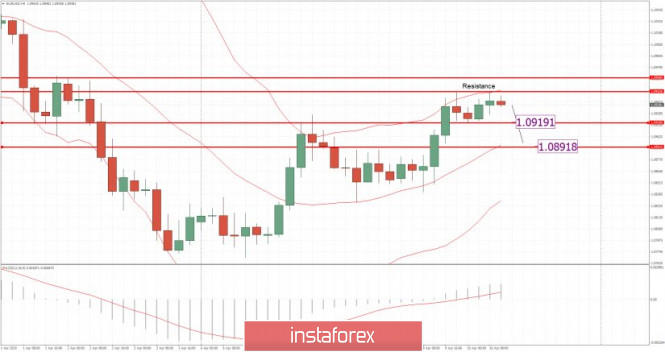 A messy compromise to unlock €500bn (£438bn) of EU support for countries hit hardest by the coronavirus pandemic has been struck after Italy’s prime minister, Giuseppe Conte, warned that the existence of the bloc was at stake.

EU finance ministers on a video conference call struck a deal late on Thursday after the Netherlands shifted on a demand for “economic surveillance” of countries benefiting from €240bn of credit lines via the European stability mechanism, a bailout fund for struggling member states.

Support levels and downward targets are set at the price of 1.0890.