The USD/JPY pair has kept the intrigue of the last two days in the Asian session today. The expected convergence on the Marlin oscillator is not yet ready, but the prerequisites for this have been strengthened – the same formation has formed on a smaller chart. The US stock market showed growth on Thursday and Friday, but today the Japanese Nikkei 225 is down 0.07% due to weak economic performance. Japan’s balance of payments for September fell from 1.72 trillion yen to 1.49 trillion, the base volume of orders for engineering products for the same month showed a decrease of 2.9% after -2.4% in August. 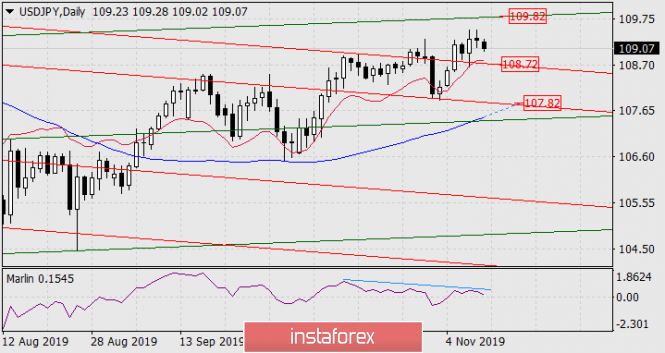 Formally, a completely upward trend remains on the daily chart: the price is above the indicator lines, the Marlin oscillator is above the zero mark, above and below the price, their goals are waiting for: 109.82, 108.72. 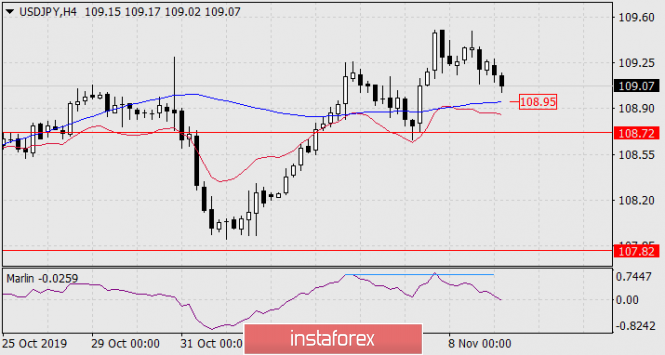 On the H4 chart, its own weak convergence is formed. To achieve the first lower target, the price needs to overcome the support of the MACD line at 108.95, but after that the price has little free movement, about 20 points. We expect the main movement after consolidating the price at 108.72, in this case, the 107.82 target opens – the estimated point of intersection of the red price channel line with the MACD line on the daily

In case of continued growth today, the US stock market, the dollar may turn around to increase. The target of 109.82 as one of the lines of the growing price channel can be reached within two days.