Optimistic data on the Australian economy came out this morning, on Wednesday. As we expected, GDP for the first quarter turned out to be better than forecast: -0.3% against the expected -0.4%. In addition, issued permits for new construction in April showed a decline of only 1.8% compared to expectations of -10.8%. As a result, the Australian dollar grew by 90 points in the Asian session today, breaking the upper border of the price channel (0.6937), which is why the channel disappears from our reviews until a new unambiguously readable reversal appears. The target levels are record extremes. The nearest at 0.6975 was reached this morning, the next target is the level of 0.7080. Behind it is 0.7185. 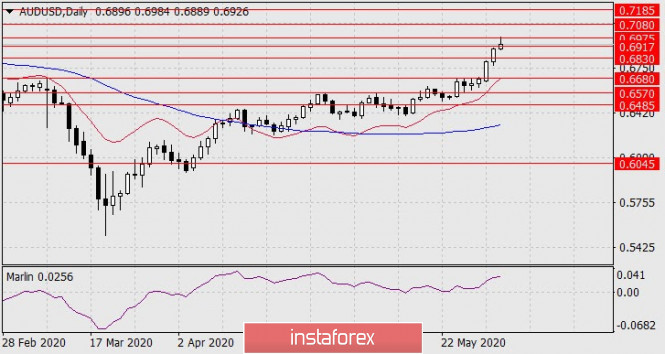 The price rises very quickly with a moderate growth of the Marlin oscillator in its own narrow channel on the four-hour chart. The output of the indicator signal line from its own channel down will become a signal for a correction of the price. This can happen when the price drops below 0.6900. 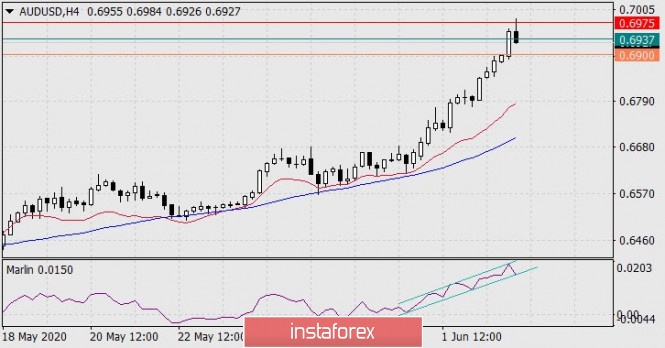 It is hardly possible to calculate the depth of the correction since there are many local levels in front of it, therefore, it is not advised to open sales, respectively. You can possibly retain purchases while aiming for 0.7080. It is acceptable to open short-term purchases with a price transition above 0.6975.