Unlike the first week of the fall, when a key event (a report on the US labor market) left investors indifferent, the September meeting of the ECB made a real sensation on the market. Prior to the Governing Council’s meeting, there was much talk of whether the QE should be reanimated, and about the euro’s response to a lack of monetary stimulus. A consensus assessment by Bloomberg experts suggested that Mario Draghi and his colleagues would cut their deposit rate from -0.4% to -0.5% and begin buying assets worth €30-40 billion a month. It was all the more surprising to see that with a smaller program of quantitative easing, the euro went to the 9th figure’s founding and luring the bears into a trap.

Most likely, investors were confused by the indefinite period of validity of QE, although subsequently, the euphoria of euro sellers gave way to disappointment. Starting in November, the ECB will buy assets worth $20 billion a month, which may mean that it did not change its rules. This means that the capabilities of the regulator are limited. He needs support from the governments of the eurozone countries, which should increase government spending and bond issues. Only in this situation will the European Central Bank’s “bazooka” operate. Mario Draghi called on Germany and other countries to fiscally stimulate the economy, essentially signaling that the ECB’s firepower is running out. The EUR/USD bulls immediately went on the attack.

At first glance, optimistic forecasts for the main currency pair look strange. The US GDP is growing faster than its European counterpart. Inflation in the United States is about to exceed the Fed target, and the labor market is strong as half a century ago. However, the interim agreement between Washington and Beijing that Donald Trump spoke about, reducing the risks of promiscuous Brexit, the pro-European government of Italy and, most importantly, the desire of investors to get rid of European bonds bought specifically for QE, can become important “bullish” drivers for the EUR/USD pair. The reaction of the pair in the launching of the quantitative easing program in 2015 serves as evidence. Instead of continuing to peak, German bond yields went up, while the euro strengthened.

Yield dynamics of US and German bonds 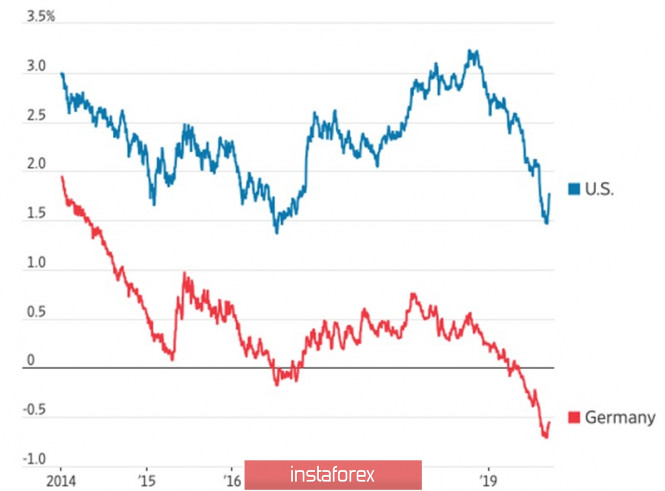 In the week of September 20, all investor attention will be riveted to the Fed meeting. It seems that the American Central Bank has completely turned a blind eye to economic theory and is acting on the orders of the US president. According to a consensus estimate by experts at the Wall Street Journal, GDP in 2019 will grow by 2.2%. Unemployment has been at the bottom since the 1970s, and core inflation in August accelerated to 2.4% y/y. These indicators are in favor – at least in favor of keeping rates at the current level if not tightening monetary policy. Jerome Powell is going to reduce it. The derivatives market is sure of this by 86%, and if the FOMC gives a signal to continue the cycle of monetary expansion, the EUR/USD pair will rush upward.

Technically, a breakout of the upper border of the downward trading channel near the resistance of 1.1095 will increase the risk of activating the “Shark” pattern with a target of 88.6%. It is located near 1.1365. 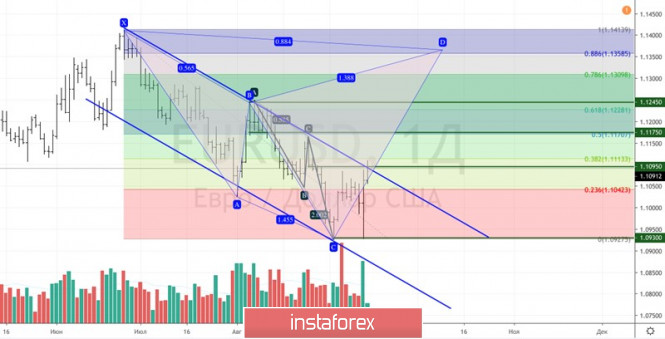