When investors’ desire to get rid of the US dollar and the growing interest in the euro are intertwined, the “bulls” on EUR/USD cannot be stopped. The GBP/USD soared to the highest since May 2018 against the serious sagging US GDP since the beginning of the accounting in the post-war period, undermining faith in the V-shaped recovery of the US economy, the willingness of the Fed to expand its program of liquidity provision on repo and currency swaps, as well as the comments of Donald Trump. The president suggested the idea of postponing the elections, since voting by mail creates grounds for fraud. Political uncertainty is an important negative driver for the US dollar, and it must be admitted that it is not the only one.

After the world’s leading central banks in unison lowered their main interest rates to zero levels, and the turmoil in financial markets remained in the past, life in Forex has become more fundamental. If in the spring and early summer, the USD and S&P 500 indices reacted differently to macro statistics for the United States, then their combined fall in response to the more than 32% sagging of US GDP in the second quarter suggests that the dollar no longer enjoys the preference of the main safe-haven asset. It shows an increased sensitivity to the state of the US economy. In this regard, disappointing data on business activity and the labor market in the week to August 7 may lead to a drop in the index of economic surprises and a rise in EUR/USD.

Dynamics of bond yields and the US economic surprise index 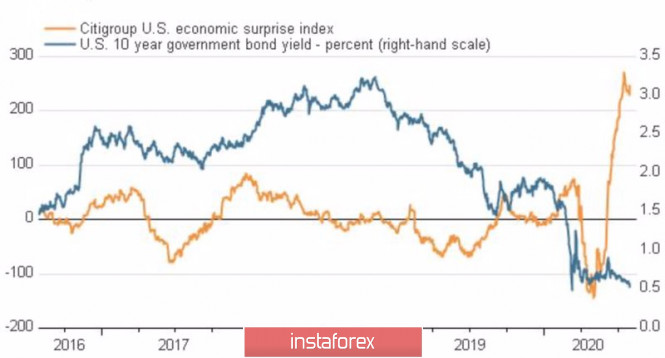 If the US dollar falls due to policy and a potential deterioration in macroeconomic conditions, growth in the number of infected COVID-19, the euro draws strength in improving the epidemiological situation in the Old World, in the belief that the Eurozone economy will return to pre-crisis levels faster than the US, and finally, in anticipation of the diversification of portfolio investors and foreign exchange reserves by central banks in favor of “Europeans”. An important driver of EUR/USD growth in the medium term may be the acceleration of global inflation triggered by a large-scale monetary stimulus. As a result, US, German, British and Japanese bond yields will go up, which is historically considered good news for the main currency pair.

Dynamics of EUR/USD and bond yields 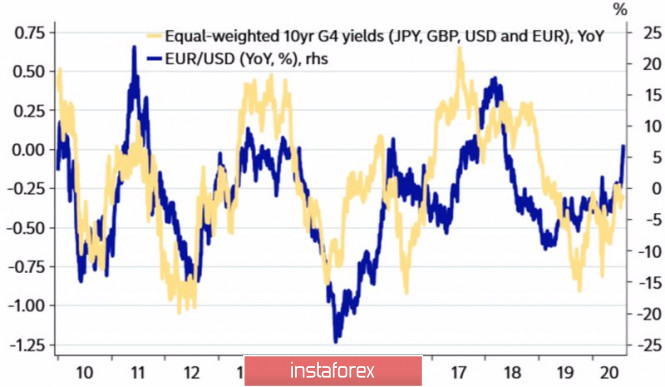 However, in my opinion, at the end of July, the market was running ahead of itself and it needs a break. The outlook for global GDP is far from rosy, with German and Spanish gross domestic product data in the second quarter disappointing, as did French consumer confidence. Leading indicators from Bloomberg indicate that the Chinese economy slowed down in July. If you add to this the severe epidemiological situation in the world and in the US, then a correction of EUR/USD looks very likely.

← EUR/USD analysis for July 31 2020 – Bearish engulfing on the 4H time-frame and poential for the downside rotation towards
Trading plan for USDCHF for July 31, 2020 →