To open long positions on EURUSD, you need:

The pressure on the euro remained at the beginning of the European session on Friday, and if you remember my morning forecast, I recommended opening short positions when the level of 1.0922 is retested or after it is fixed below it, which happened. On the 5-minute chart, we clearly see that there was no major rebound from the support of 1.0922, and on the second test, the bears achieved a further decline in the euro to the minimum of 1.0900, where I recommended fixing the profits. At the moment, a new low of 1.0889 has been formed, which the bulls need to protect in the afternoon during the publication of the minutes of the April meeting of the European Central Bank. Only the formation of a false breakout there will be a signal to open long positions. Otherwise, I recommend buying EUR/USD now only for a rebound from the minimum of 1.0855. An equally important task for the bulls will be to break through and close the week above the resistance of 1.0930, which will maintain an upward trend in the market. If this fails, the pressure on the euro will only increase at the beginning of next week. 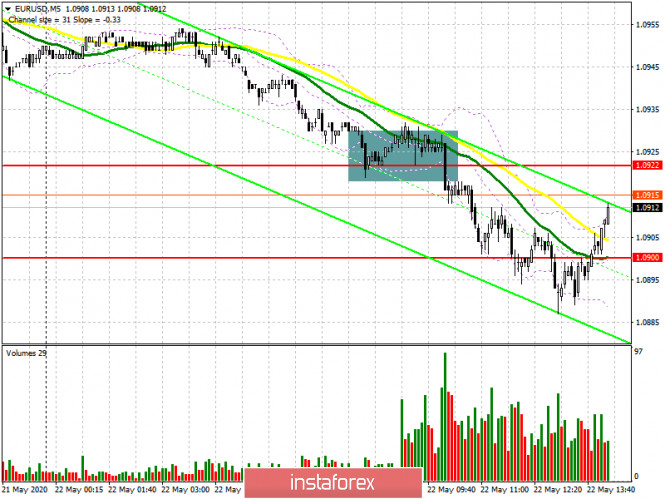 To open short positions on EURUSD, you need:

Sellers have coped with the morning task perfectly and are still in control of the market. A small correction after updating the low of 1.0900, from where I recommended opening long positions in the first half of the day, may lead to a resistance test of 1.0930, which will be an excellent signal for a return to the market of large sellers who are able to break the low of the day around 1.0889 today. This scenario will lead to a larger sale of EUR/USD in the area of the minimum 1.0855, where I recommend fixing the profits. If there is no activity from sellers after the resistance test of 1.0930, it is best to postpone short positions until the 1.0966 high is updated, in the expectation of a downward movement of 25-30 points by the end of the day. It is not yet clear how the market will behave during the publication of the European Central Bank’s minutes, but it will most likely be possible to observe a slight strengthening of the euro. 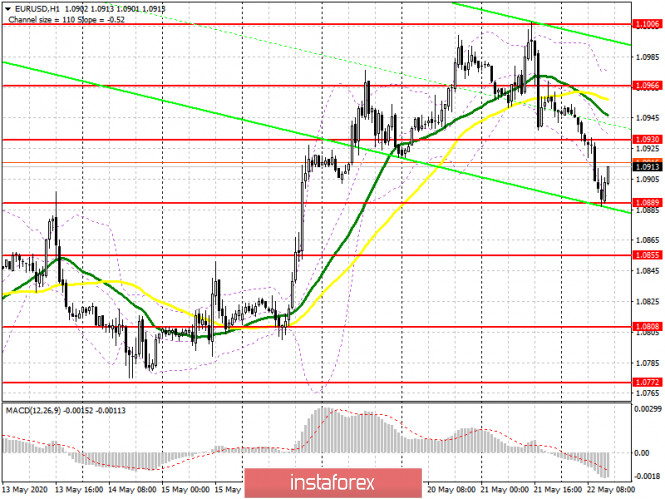 Trading is below the 30 and 50 daily moving averages, which indicates a continuation of the downward trend in the short term.

Note: The period and prices of moving averages are considered by the author on the hourly chart H1 and differ from the general definition of the classic daily moving averages on the daily chart D1.

In the case of an upward correction in the second half of the day, the average border of the indicator around 1.0935 will act as a resistance, and you can sell the euro immediately on a rebound after testing the upper border in the area of 1.0975.

← EUR/USD: Euro rally stopped; hopes for a rapid recovery in the global economy were not enough
GBP/USD: plan for the American session on May 22 (analysis of morning deals). Bears put pressure on the pound and trying →