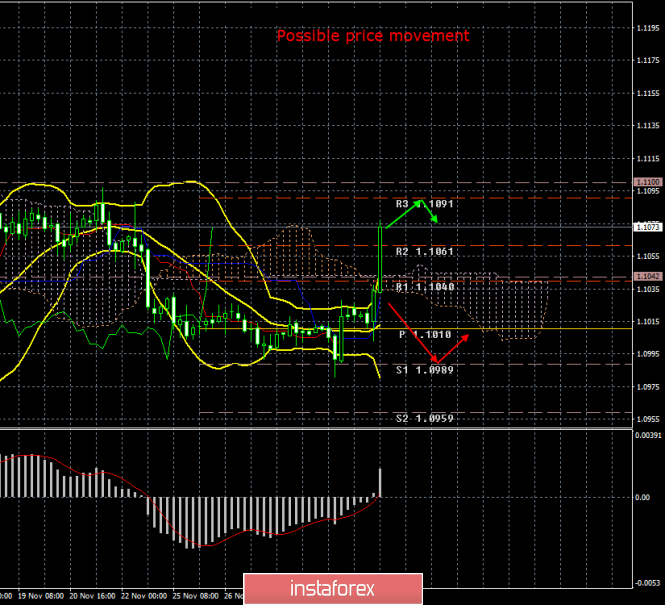 Average volatility over the past 5 days: 29p (low).

The EUR/USD currency pair sharply grew for the first trading day of the new week. Although there were certain macroeconomic reasons for this, the growth of the European currency cannot be called expected. On the other hand, after a few weeks, the so-called paradoxical situation was finally resolved, which did not allow the currency pair to continue the downward trend or start the upward movement. Now, it seems that this situation has remained behind, volatility has already slightly increased, and traders can begin to return to the market, having felt the easing of pressure on the currency pair. We can immediately assume, just by taking a glance at the calendar of macroeconomic events for December 2, that the euro’s growth is associated with the speech of ECB President Christine Lagarde. However, this is completely wrong. Firstly, Christine Lagarde began her speech just two hours ago, while the strengthening of the European currency began almost five hours ago. Secondly, during her speech, Lagarde only indirectly touched on the topic of monetary policy and did not report anything that could cause a serious growth of the European currency. But first things first.

The trading day began with the publication of business activity indices in the manufacturing sectors of Germany and the European Union. Despite the fact that these indicators remained below the critical level of 50.0 in November, both showed a slight increase. German – up to 44.1, European – up to 46.9. Although the gains were indeed small, theoretically, these publications could have such an effect on traders. Next, bypassing the ECB head’s speech, the indices of business activity in the US manufacturing sector according to Markit and ISM were published. If the first index rose to 52.6, then the second, which is more significant, showed a decrease to 48.1, while the index of gradual acceleration of inflation from ISM, although it rose to 46.7 still turned out to be lower than the forecasted one. Thus, we can say that macroeconomic statistics from the United States turned out to be weak and did not meet the expectations of investors. And in sum, we have enough reason for traders to buy the European currency on Monday. We believe that the technical component also played a significant role in today’s growth of the euro/dollar pair. The pair spent the entire previous week in an extremely narrow trading range, so it was clear to absolutely everyone that sooner or later the flat would end. The question was only when exactly this will happen. It happened today. The bulls got a chance since the bears did not receive the necessary grounds for continuing sales of the currency pair.

As for Lagarde’s speech, as we have said, it did not concern the prospects of monetary policy. As it turned out, the ECB is in full swing exploring the possibility of launching an official digital euro. According to Lagarde, the creation of a “crypto-euro” can strengthen the position of the euro currency around the world, but also undermine the stability of the global financial system. Since at this stage it is necessary to very carefully weigh the pros and cons, to assess all the risks from this step, so far only discussions are taking place. “Our goal is to create an innovative, reliable and integrated new payment system in Europe. This will benefit everyone in the euro area and significantly strengthen the position of the euro in the world,” Lagarde said at a hearing in the European Parliament.

We believe that a strong growth of the euro currency today is certainly good, but what will happen next? After all, the European currency still has no fundamental support. Yes, today’s business activity indices slightly pleased traders, but they remained in a recession zone. In addition to these indices, other macroeconomic indicators remain at the stage of slowdown and deterioration. Inflation rose to 1.0%, but what is 1% if the ECB has been striving for 2.0% for several years now. Only 2.0% will allow us to consider such a step as a tightening of monetary policy. But what if Donald Trump imposes duties on European goods tomorrow? But what if on December 15 he imposes duties on Chinese goods worth another 160 billion euros? But what if the trade war between Beijing and Washington continues to escalate? After all, all this will first of all negatively affect the European Union, its economy and the euro currency. Thus, we believe that, despite today’s growth, which has not yet been completed, the prospects for the euro remain extremely vague.

From a technical point of view, you need to wait until the situation settles down a bit. Strong growth is always replaced by calming the market, and all indicators will take some time to bounce back. Also, after the jerk is completed, a downward correction should follow, and by its strength, we can understand whether traders are configured to further purchase the pair or today there was a one-time impulse.

The EUR/USD pair started an upward movement, and volatility sharply grew today. Thus, for those who are already in longs, it is recommended to take profits around the levels of 1.1091 and 1.1100. From our point of view, it’s quite dangerous to open new purchases of the euro currency now, as the pair can go into correction. Further trading strategy can be discussed after the completion of the current upward spurt and correction after it.

Explanation of the illustration:

Tenkan-sen is the red line.

Kijun-sen is the blue line.

Red line and bar graph with white bars in the indicator window.

← EURUSD and GBPUSD: ECB President Christine Lagarde has no reason to rejoice. Pound trading continues to be restrained
GBP/USD. December 2. Results of the day. Trump declares trade wars to Argentina and Brazil. Who is next? →