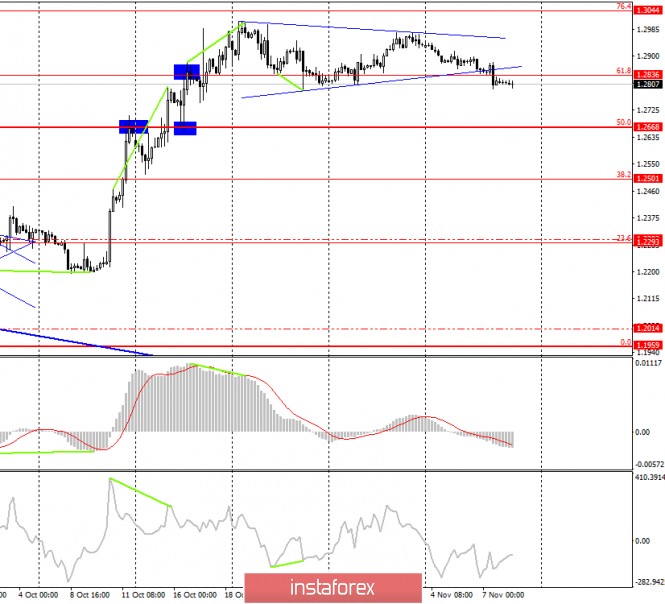 As seen on the 4-hour chart, the GBP/USD pair performed consolidation under the correction level of 61.8% (1.2836). Thus, the fall in quotations can be continued in the future in the direction of the next Fibo level of 50.0% (1.2668). The rate of the pound/dollar pair came out of the narrowing channel, which also increases the probability of further fall of the pair. In total, for the week from October 4 to 8, the British pound fell by 180 points, which, it turns out, is even more than the loss of the euro. However, judging by the chart, it seems that traders rested all week. The downward trend is unconvincing, it looks fuzzy. New channels and emerging divergences are not observed at the moment.

The UK continues to remain in a whole swamp of problems and crises. If traders paid attention to all this swamp, then the pound would already be approaching the price parity with the US dollar. Britain remains mired in a political crisis, the noose around its neck called “Brexit” is not yet tightened, but tightly squeezes the neck of the United Kingdom. Scotland is increasingly eager to hold a new referendum on independence and leave the UK to stay in the European Union. The Bank of England is “thinking” about lowering the key rate. Two board members were prepared to lower the rate at Thursday’s meeting. The economic report from the UK this week was just one: business activity for the services sector. With great difficulty, they rose to 50.0. This report, of course, can be seen as a positive moment, but it was one, but the negative.

To some extent, the pound is very lucky that with the information background that we now have, the fall in quotations is very restrained. The political sphere of the UK is now temporarily not a news provider, as the most uninteresting part of the series “Brexit” for currency traders has begun – the parliamentary elections. Within five weeks, the deputies will not take any legislative decisions, but this time will be spent on debates, familiarization of the electorate with the programs of each party, promises. However, I still believe that the British pound will continue to fall, as there is no reason for its growth. Perhaps something will change next week.

Forecast for GBP/USD and trading recommendations:

The pound/dollar pair closed under the Fibo level of 61.8% (1.2836). Thus, I expect a moderate drop in quotes towards the level of 1.2668 and recommend selling the pair with this goal and the stop-loss level above the correction level of 61.8%. But I do not recommend buying a pair without a single signal up. In the near future, it may be possible to build a new trend channel.

← USDCAD – take profits!
Analysis of the trading week from October 4 – 8 on EUR/USD. The European currency returned to a drop →