This review will start with the topic of coronavirus. As it became known, the United States Congress approved the allocation of two trillion dollars to support the American economy from the consequences of COVID-19. First of all, assistance will be provided to medium and small businesses, as well as to those sectors of the economy that have suffered the most significant losses as a result of the rampant pandemic around the world.

From the latest important news, it is worth noting that the coronavirus was detected in the British Prince Charles. According to British media reports, the condition of the royal person is satisfactory and there is no reason to worry. Such is the case. No one is immune to coronavirus infection.

If we go to the technical picture of the dollar/franc currency pair, then there are very interesting events. 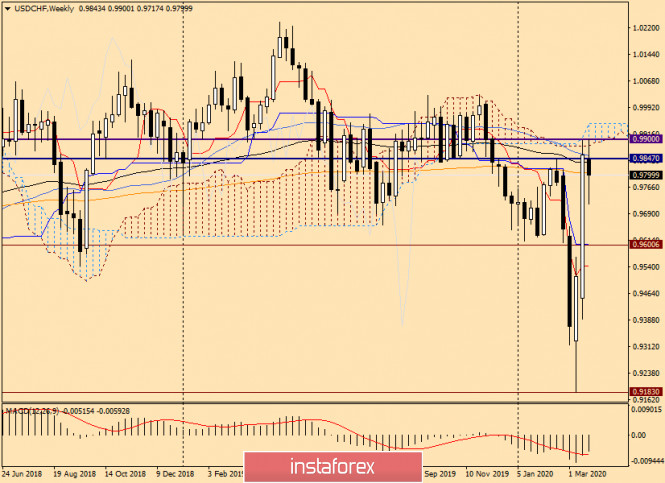 After the pair’s decline to 0.9183, there was a more than significant recovery, which then turned into a trend change.

The pair finished trading over the past five days above 0.9847, that is, the point where the fall actually began. It would seem that the quote has every chance to continue growing, but the 50 simple moving average, the lower border of the Ichimoku indicator cloud, as well as one of the key levels of 0.9900, stopped the rise.

For the future direction of USD/CHF, it will depend on the candle formed this week. If it turns out to be a reversal and even formed under such a significant level as 0.9900, you can expect a movement in the south direction and prepare for the pair’s sales.

If the bullish mood returns and the weekly trading ends above 0.9900, or even better, if the Ichimoku indicator leaves the cloud, the rise will continue to the area of parity – the symbolic psychological and technical level of 1.0000.

A reversal candle that will determine a bearish scenario will indicate goals in the area of 0.9650-0.9600, where the minimum values of several weeks and the Kijun line of the Ichimoku indicator are located. 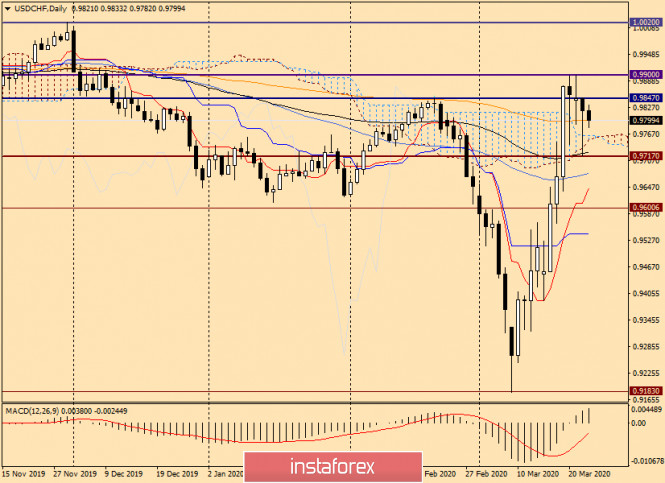 On the daily chart, after the appearance of the candle for March 20, the picture is already becoming bearish. However, it should be noted that the pair is declining very reluctantly. This is indicated by a particularly long shadow of yesterday’s candle.

The quotes are supported by 200 and 89 exponential moving averages, both borders of the Ichimoku cloud and the level of 0.9717, which is not at all surprising. In the article on USD/CHF, I have repeatedly pointed out that the mark of 0.9700 (as well as 0.9900) is extremely strong and is taken into account by the market. At the same time, this level can perform the functions of both support and resistance.

I believe that the breakout of the support of 0.9717 and the price-fixing under 0.9700 will indicate a bearish scenario for USD/CHF. The power of the bulls over the pair will return the true breakout of the sellers’ resistance at 0.9900. In this case, the road will open to another strong resistance level of 1.0020.

As I mentioned more than once in previous materials on USD/CHF, the pair feels quite uncomfortable above the parity level of 1.0000. After a slight finding above this landmark mark, there is often a fall, and quite serious in its scale.

However, it is too early to talk about parity. First, the dollar/franc bulls need to overcome the mark of 0.9900 and secure the trade above. 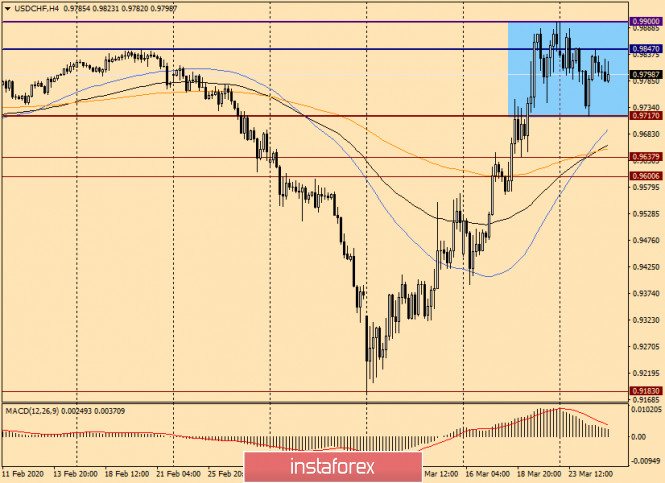 In this timeframe, it is clearly visible that the instrument trades in the range of 0.9717-0.9900. For those who trade on price exits from ranges, you can try buying at the breakout of 0.9900.